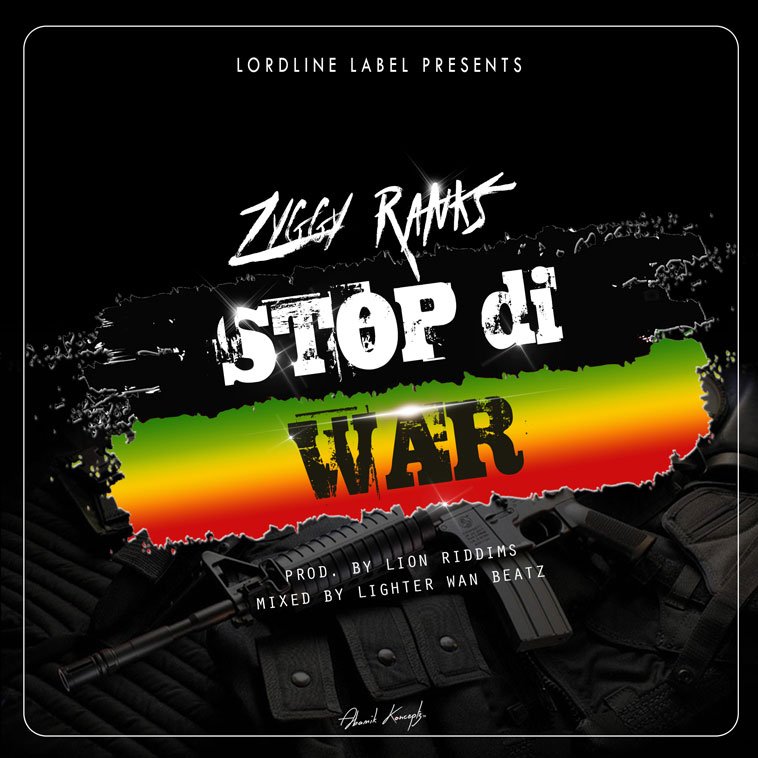 Reggae Music has often been associated with conscious lyrics; the kind that effect change, and affect thoughts. It remains one genre that gives a voice to the downtrodden and vulnerable in our society. Beyond the message in reggae music lies infections rhythms, and impressive vocal delivery. The genre has therefore been used by social activists disguised as musicians to preach for or against Causes they believe in. Stop Di War is one such song, coming from Zyggy Ranks, of the Upper East Region’s finest emerging reggae artistes.

Stop Di War is informed by persistent recurring conflicts in parts of the Northern Region as well as the protracted chieftaincy dispute in Bolgatanga. Whilst many may have never heard of conflict(s) in Bolgatanga, the indigenes are aware of the simmering dispute between two rival factions when it comes to Chieftaincy. Zyggy Ranks therefore coming in at the time where there’s calm, and significant attempts to fix the situation makes two things; a creative genius, and a man bringing social change through music.

Starting Stop Di War in a blend of languages (English & Gurune), Zyggy Ranks the affable musician who has garnered massive following for his craft delves into a creative rendition of lyrics; over a beautiful beat produced by Lion Riddims and mixed by Lighter Wan Beats.

25th August 2019, I visited Bolgatanga for a Youth Convention by the Church of Christ (SM); whilst at the Bolga Jubilee park, the recurring sound of an AK47 caught my attention, I had to then inform all our security detail to be on a high alert as what I heard wasn’t firecrackers but the sound of an AK47…True to my presumption, it was confirmed that a house had been burnt just behind the Jubilee Park leading to a disagreement which in turn led to the rapid fire of an AK47 to serve as a warning against any aggressors; and yes, it was related to the Chieftaincy dispute in Bolgatanga. It is therefore refreshing to know that a young musician like Zyggy Ranks is using music to speak to the hearts of the people of Bolgatanga; asking them to let love and unity influence all dealings.

Zyggy Ranks is signed to Lordline Label. He’s previously released other singles which did creditably well in the region. Hold Di Paper & Somewae Bi brought his craft to the fore; however, due to the struggle of juggling between a music hussle and school, it has taken him almost a year to release this amazing song of influence. As a fan, I believe the wait was worth it. #StopDiWar

A TRUE LIFE STORY – LOVE IN WORD OR LOVE IN DEED?

Deejay Aluther – The Nurse Ruling The Airwaves In Bolgatanga 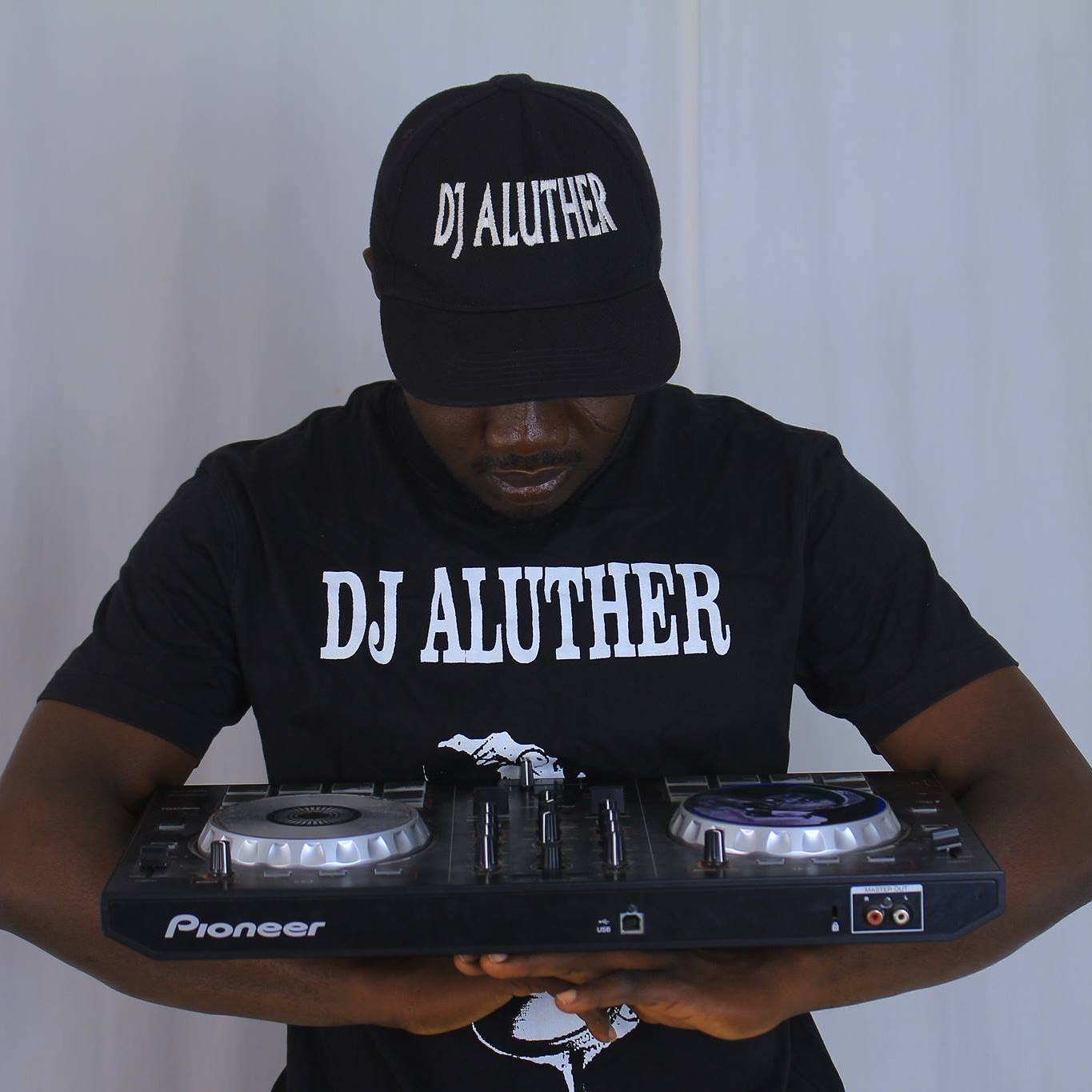 Popularly known as Dj Aluther, his dedication to radio as a tool for reaching the youth on various levels earned him an award as the Best Deejay of the Year at the Delight Box Entertainment Upper Music Awards 2016. He was also nominated in 3 categories at the Northern Entertainments Awards held in Tamale some months ago; overall presenter of the year, best deejay of the year and best entertainment show of the year.

Born Akunsike Martin in Bongo, the Word Fm Deejay and Presenter has through relentless efforts carved a niche for himself via the “Word House Party Mix”; a radio show strategically and purposefully couched to satisfy the insatiable need of quality entertainment in the region.

In what can be described as an entertainment cocktail, Deejay Aluther serves his audience with bits and pieces of all there is to entertainment; entertainment news, celebrity interviews, talent promotions, event promotions and a great deal of music mixes with a spice of real talk to engage his audience. His radio show which airs every Saturday between the hours of 4:00pm-6:00pm on Word 88.3Fm in Zuarungu is one of the most interactive, vibrant and remains arguably the weekend show with the largest listenership in the entire Upper East Region.

With earlier experiences at A1Radio also in Bolgatanga as part of the learning process, accepting an appointment and running an effective show on Word Fm in July 2014 was really not too daunting a task to carry.

Dj Aluther had always wanted to be an engineer and a radio personality, though he missed out on becoming an engineer, his radio dream materialized and new passion replaced engineering and that is nursing. He went further to study nursing and now practices in Bongo.

Among the spectacular moments spent on radio were moments that he held the legendary King Ayisoba and his own role model, DJ Black on separate interviews. According to him, he describes the experience as a rarely refreshing experience.

As someone who spends just 2 hours a week on radio yet has so much popularity and influence, he believes media is the most required tool in transforming the savanna considering the educational, informational and entertainment nature of media presentation. He believes the media can be bring about a rapid economic boom in the savanna regions of Ghana since the area is relatively unknown, media can be used to promote the area which will eventually attract investors.

Do make time with Dj Aluther on the “– Word House Party Mix” and you won’t regret it.

If you are in the Upper East Region catch SV-JAM OF THE WEEK with Dj Aluther on  “Word House Party Mix” on Saturdays from 4pm – 6pm on Word 88.3Fm.

Diva 1 is arguably the most prolific female musical gem blessing the Tamale music scene; her energetic, and animated performances continue to serve as a thrill wherever she performs. 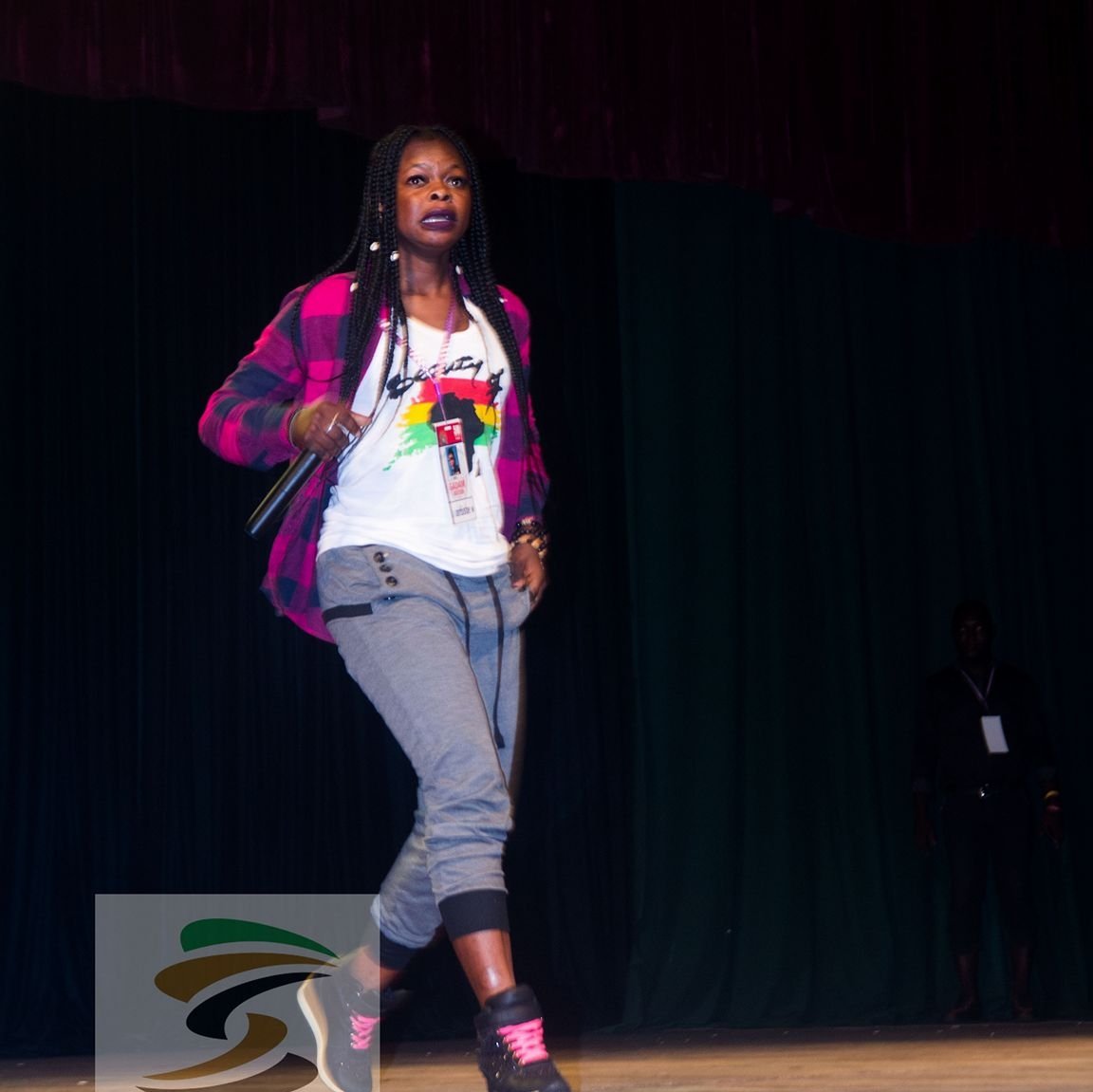 In an obvious display of temerity, the high-energy performer Diva 1 has dropped another song titled “drop that sh*t”. Unfortunately the lyrics and tone of the song professes insecurity. The song makes Diva 1 appear to be threatened by the emergence of a particular new artiste.  Performed in Dagbanli, English & Pidgin, Diva 1 jabs an unnamed person she referred to as “Local Girl”.

Diva 1 is arguably the most prolific female musical gem blessing the Tamale music scene; her energetic, and animated performances continue to serve as a thrill wherever she performs. With a laudable vocal strength, she matches her male counterparts with frequent releases. Her consistency in the industry exudes the characteristics of a focused individual. One might attribute her resilience to a formidable team, but the enigmatic performer is yet to land a record deal – if you are looking to manage or produce an artiste whose skill and commitment to the art is peerless, then you should reach out to Diva 1.

Listen to Survivor by Diva 1 below

Diva 1 doesn’t seem to rest on her oars, a demeanor that has got her performing different genres effortlessly. However, her recent singled titled “drop that sh*t” may cast a dent on what she represents as a brand; Diva 1 appears to have thrown caution to the wind and launched an unwarranted attack on another artiste.

Even though Diva 1 goes at her target without explicitly stating who it is, one doesn’t need a soothsayer to detect the animosity deeply enshrined in “drop that sh*t”.

Tamale has been saddled with so much musical “beef”, a situation that transcends the loyalty of fans. Whilst “beef” has culminated into success for some artistes, its also led others to an abyss; an oblivion beyond redemption. For the budding industry to truly become a huge economic success, tact and strategy must dominate the actions or inactions of artistes. To survive a religiously polarized society, one needs to employ a lot of thought into all they do. Whilst many might jump to an explicit and raunchy song, they will rather patronize music that entertains and educates them wholly in a very creative way. So, the release of “drop that sh*t” is not only a deviation from the fun-nature of Diva 1’s songs but an attempt at confusing some of us who have fallen in love with what she brings to the musical buffet.

As one of the few ladies giving the male dominated music industry in Tamale a true taste of what a lady-musician brings to the table; shifting focus from entertaining music, to war-like music is not in your best interest.  The gangster posturing of artistes in the name of appearing street comes with a price, and if that’s the path Diva 1 has chosen to travel, she should state that explicitly.

Oboy, not a week without controversy in Tamale.

Sherifa Gunu recently bemoaned the indifferent nature of Ghana music , likening it to a stagnant if not dieing industry. Whilst pundits and music lovers blame the lackluster nature of today’s Ghana music on musicians & their record labels, Sherifa Gunu believes the structures remain the problem. 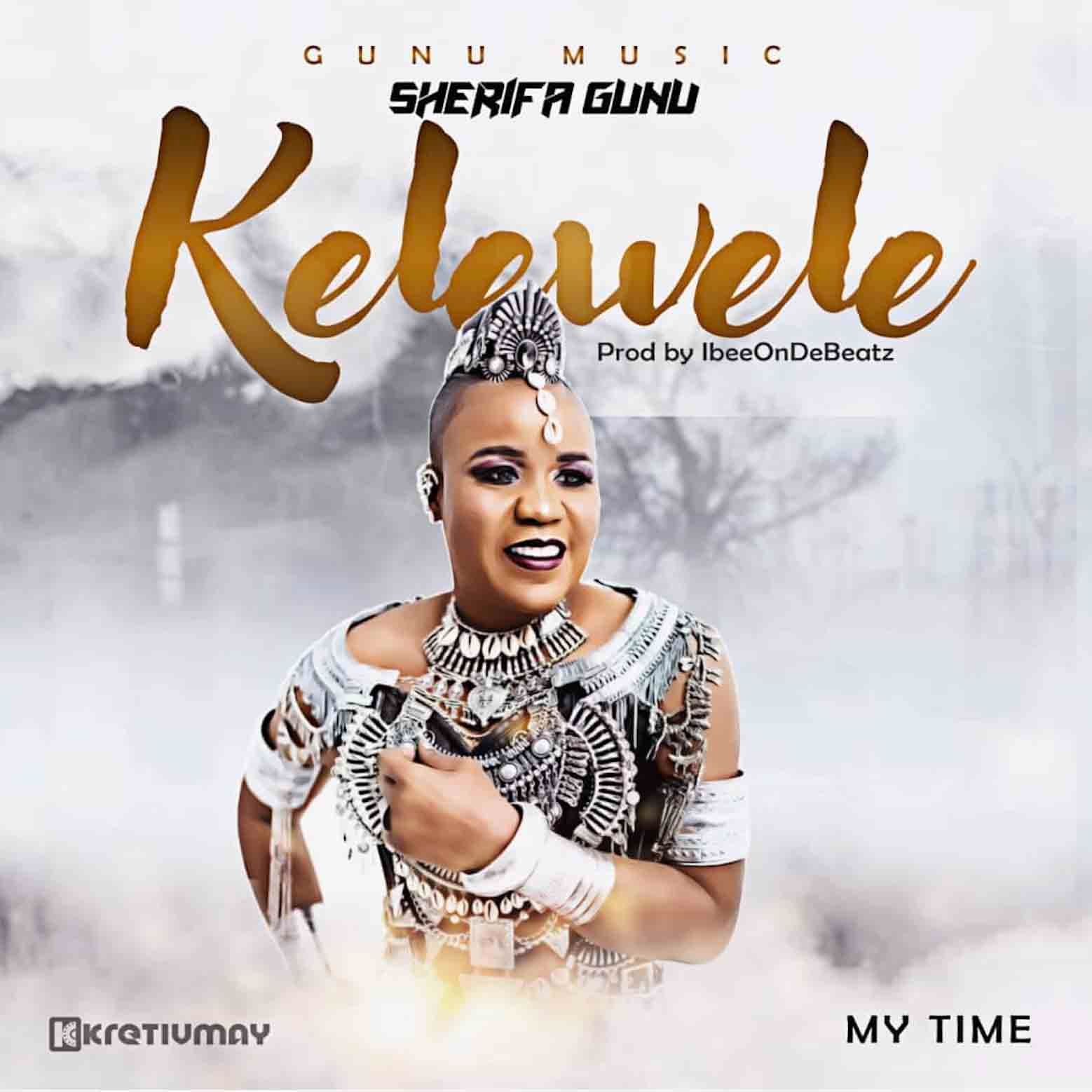 Kelewele is Sherifa Gunu’s newest song; a typical dance-tune with a good dose of positive vibe. The amazing singer and dancer seems to have heard the cries of fans, and has therefore release a precursor to some amazing projects she’s been working on with her management. For fans, it is refreshing to know she hasn’t lost her musical prowess.

Sherifa Gunu recently bemoaned the indifferent nature of Ghana music , likening it to a stagnant if not dieing industry. Whilst pundits and music lovers blame the lackluster nature of today’s Ghana music on musicians & their record labels, Sherifa Gunu believes the structures remain the problem. As an effort to prove that the quality and creativity hasn’t dipped, Kelewele is meant to send everyone tapping their feet and approaching the dancefloor. A sign that, music made in Ghana is still infectious. The success of Kelewele may just prove why she thinks the industry can survive if attention is paid to ensuring the structures survive.

With dance as one of her strengths, Sherifa Gunu composes music to elicit the dance in all of us. It is not surprising, that Kelewele is fast evading the places of bad music on the dancefloor, with adjoining massive airplay across the nation.

In recent times the accentuated voices of artistes can be heard across media platforms, bemoaning the high cost of promoting their creative works; Sherifa Gunu in a bid to score more points in the promotion of Kelewele brought her comic side to life. In an interview with the Communications director of Zylofon Media, Samuel Atuobi Baah aka Sammy Flexx, who also doubles as the host of Zylofon Fm’s “Showbiz Agenda”, Sherifa threatened to beat up any deejays and/or radio presenters who refuse to promote Kelewele. She made the fun-threat amidst laughter, and obviously endeared herself into the hearts of all in the studio. This may explain the steady but quick rise of Kelewele.

For a prolonged period Sherifa Gunu has been dormant in the release of new tunes. Despite frequently coming up in the news for other reasons, it was as if she got burnt-out with the saturated Ghana music industry. However, having emerged from a divorce, Sherifa Gunu believes the rejuvenation from the time-off is worth some spicy Kelewele.